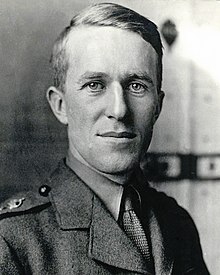 Thomas Edward Lawrence, CB, DSO (16 August 188819 May 1935), known professionally as T. E. Lawrence, was a British Army officer renowned especially for his liaison role during the Sinai and Palestine Campaign and the Arab Revolt against Ottoman Turkish rule of 1916–18. The breadth and variety of his activities and associations, and his ability to describe them vividly in writing, earned him international fame as Lawrence of Arabia, a title which was used for the 1962 film based on his World War I activities.

All the revision in the world will not save a bad first draft: for the architecture of the thing comes, or fails to come, in the first conception, and revision only affects the detail and ornament, alas!

All men dream, but not equally. Those who dream by night in the dusty recesses of their minds, wake in the day to find that it was vanity: but the dreamers of the day are dangerous men, for they may act on their dreams with open eyes, to make them possible.